When I heard about the first VR headset from Huawei the size of the normal sunglasses, with capability to work from a phone or a PC and with a SteamVR support from ScarredGhost article, I was excited. Finally we are moving towards consumer devices that do not repel people just from their looks.

Unfortunately this product was available only in China. With help from friends in Taiwan, I got Huawei VR Glass to Finland. I wanted to try them, but I couldn’t at first. Headset was shipped to me on 21st of December 2019, just days after public release, while the PC cable for the device was released later that month. 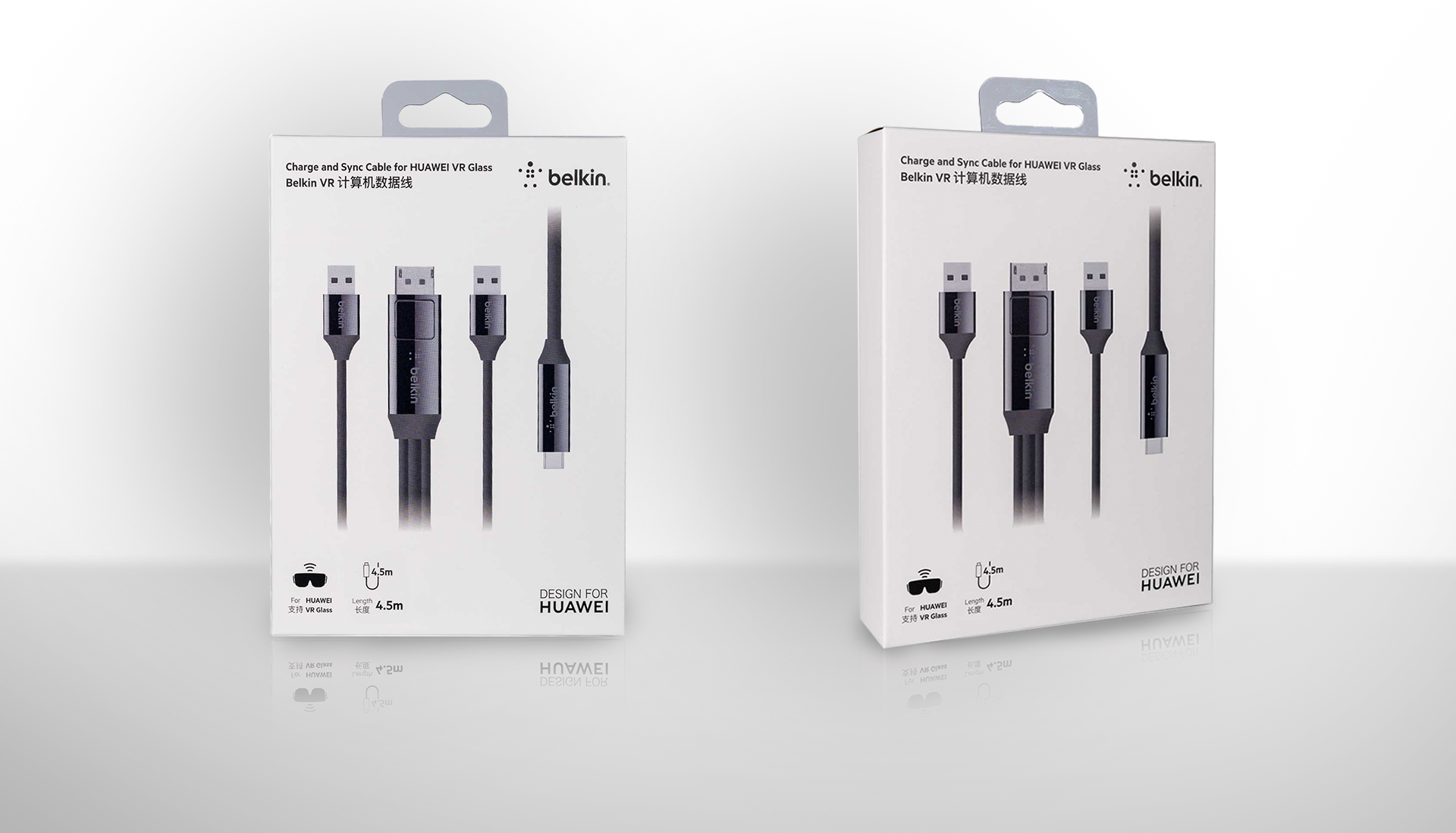 Cable for connecting Huawei VR Glass to PC from Belkin

And it wasn’t just any cable, it was one-of-a-kind cable from Belkin with two USB 2.0 ports and Display port on one side and USB Type-C on the other side. You couldn’t just buy that in a local electronics shop - you have to get it from a Huawei store in China. As for connectivity to phones, there are some limitations: Huawei VR Glass only works with some of Huawei phone models Even if you have the correct model, it requires Chinese firmware, as support is built in the firmware. So basically no phone VR outside China.

How to make Huawei VR Glass work with your PC

Few weeks later I got the cable (about $100) and experiments started. Obviously, most of the software is in Chinese, same for guides and troubleshooting forums. Thanks to my lovely Chinese girlfriend, that wasn’t an issue and it only took half an hour to install HiSuite, VR Assistant, and Upgrade Tool. Note: Huawei VR Glass would only work if you have a single display connected to your PC. If there is more than one, it would not work. When everything is connected correctly you will see your desktop wallpaper, rotated 90 degrees. After that launch VR Assistant - and a few seconds later you have your desktop view in glasses. 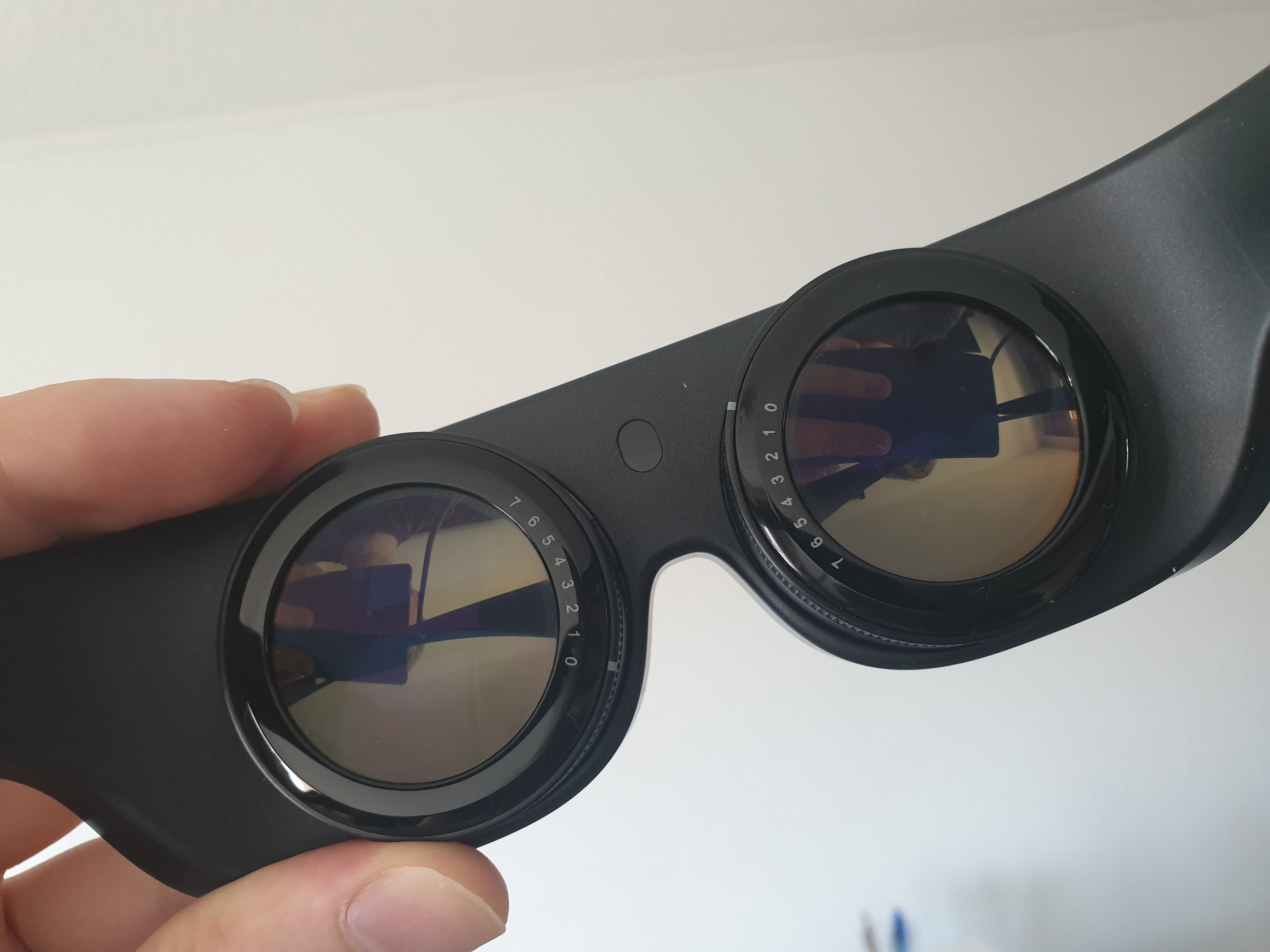 With the Glass up and running, you can go in the options and choose one of two options - screen stuck to your head or static in the VR environment. If you choose the latter one, you will be able to see a 360 picture of a room of a decent quality and a screen hanging in the air in the middle. Settings also allow you to move the screen closer or further, horizontally or vertically, change the screen’s curvature, and adjust overall brightness of the glasses. Now you can browse youtube, write emails and follow the news in the comfort of your hidden screen (although it is a copy of the real screen you have connected to the computer). That’s it, that is all you get out of the box with PC - cool looking glasses which are basically a monitor. But there’s more to it.

Huawei do advertise on their product page for VR Glass that the device is SteamVR compatible. It is achieved by adding additional tracking solutions from another Chinese company - Nolo VR. Nolo is used for many low-end Chinese VR devices that are not ready to spend resources on developing their own tracking solution, or integrating something as complex as SteamVR tracking with lighthouses. 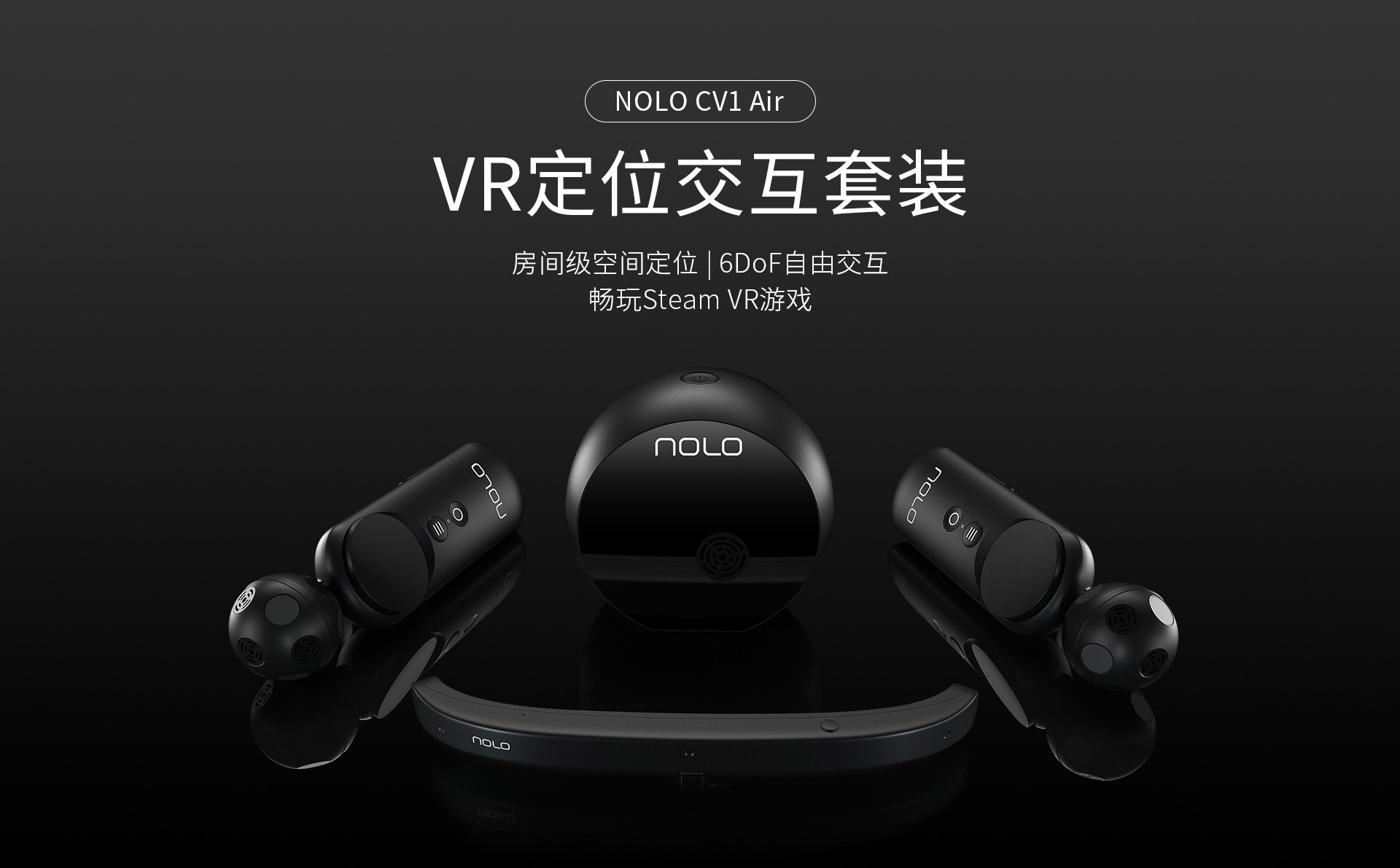 Although Nolo relies on similar technology - their solution is a bit different. Nolo is using a single, battery powered base station that shoots laser, while controllers and headset need to have this weirdly looking receiver located on the top. Since the system is limited by maximum one Nolo lighthouse per device, tracking is one directional, similar to PSVR tracking, where the player cannot turn away from the camera. I had a chance to experience this tracking before with the DPVR headset, learning that both accuracy and tracking are on very low level, so I did not purchase Nolo VR tracking for Huawei VR Glass. For Huawei’s device Nolo has a custom made tracker for the glasses that fit the style and design of the device, so even if you already have a Nolo system, you have to buy it again for about $150.

For a second there, let’s distanciate ourselves from the limited functionality of the device and appreciate the hardware. This is a device that could be easily mixed up with sunglasses if worn outside (don’t do it though, its VR glasses, you can not see through). In this tiny body is a 3,200 by 1,600 pixel LCD screen which is IMAX certified. There are speakers inside the glasses temples, producing sound good enough for watching movies. Both lenses can be adjusted separately for people who wear glasses (assuming your vision is between 0 and +7). It has a soft cloth mask held by magnets, making cleaning incredibly easy. 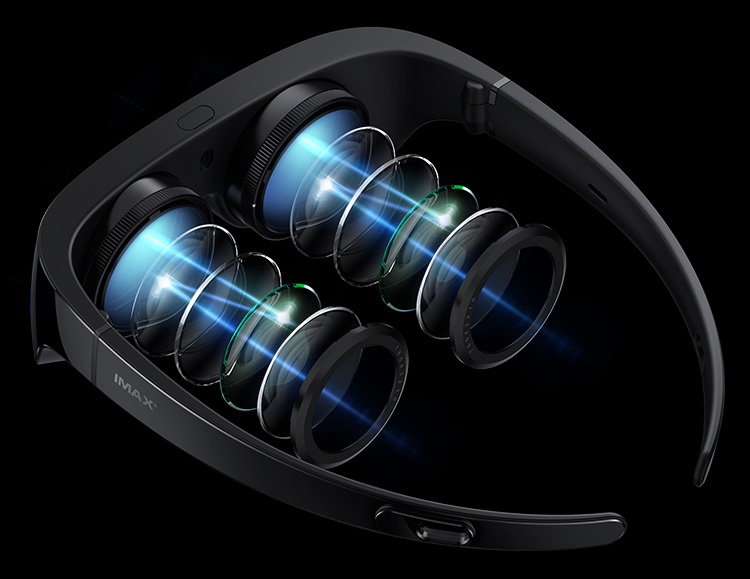 Personally for me, most impressive are the lenses - Huawei has proven that small pancake lenses can perform without big issues (more on that later). For such a small size, lenses are the greatest challenge, as there is a limit how close the screens can be located in relation to the lenses.

Lenses that are traditionally used for VR headsets are simple Fresnel lenses, which are conventional lenses just collapsed in smaller size while keeping refractive power of the original. 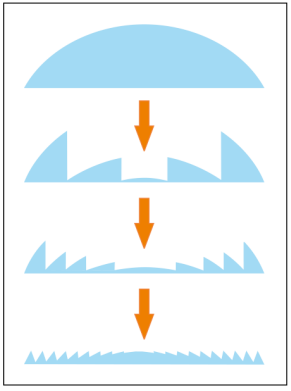 What makes traditional headsets bulky in size are the limitations of these lenses - screen and lens require having specific minimum distance between them, otherwise image would not be in focus. Think of it the same way as the human eye cannot focus on the objects that are just a few centimeters (half an inch) away from the eye. 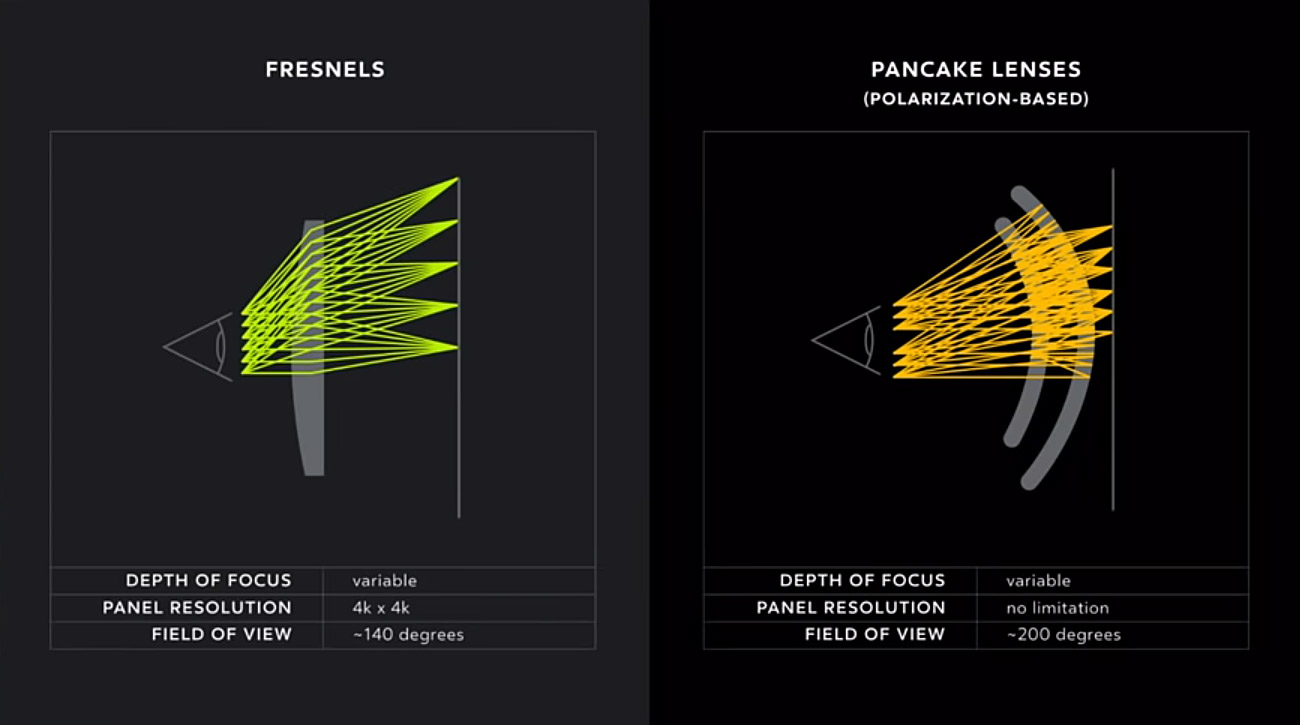 Pancake lenses solve this issue by introducing a polarised layer inside the lens that will bounce the light twice before it can reach the eye. Unfortunate effect - ability to see reflection in the headset in some conditions.

Huawei has achieved a great milestone with Glass device - it has shown the world that VR glasses can be slim, small and cool. They didn’t just showcase prototypes at CES like Panasonic and others, but they have released a product that people can get their hands on. Surely, outside of China Huawei VR Glass is quite useless without its phone VR functionality, and I would not recommend anyone to get this device for themselves. Apart from software limitations, it is clear that the device was developed for local head sizes and shapes, and does not fit well on my European face, mostly squishing my ears. However, Huawei does us a favor by spending money and resources on a device that raises the bar for consumer devices and now Oculuses and HTCs of this world have to catch up.