During spring, when everyone already thought that WMR platform is dead and we are not going to see VR headsets using WMR tech ever again, HP has announced Reverb G2 - a device built in collaboration with Microsoft and… Valve. Last one was quite unexpected, since Vale has its own VR tracking system - SteamVR. But as we have learned over the years during interviews with Valve employees - Valve only cares for VR to succeed, no matter the way. Good on you, Valve!

A little bit of background - at the moment of writing this review my daily VR driver is Valve Index, with occasional switch to Oculus Quest 2 for playing Population One. I own an OJO 500 - weird little WMR headset from Acer, but I almost never use it. Also I’ve spent quite a lot of time using Varjo VR-2 headset and Pimax 8k+, both of which will become relevant later on.

Let’s start with the visuals - trying HP Reverb G2 for the first time, I felt relief. We did it. We are at the moment in time when increasing PPD (pixels per degree) value in the consumer VR headset is no more necessary. You cannot distinguish between separate pixels unless you have very specific light conditions and you are trying your best to concentrate on the screen door. Bravo, HP! 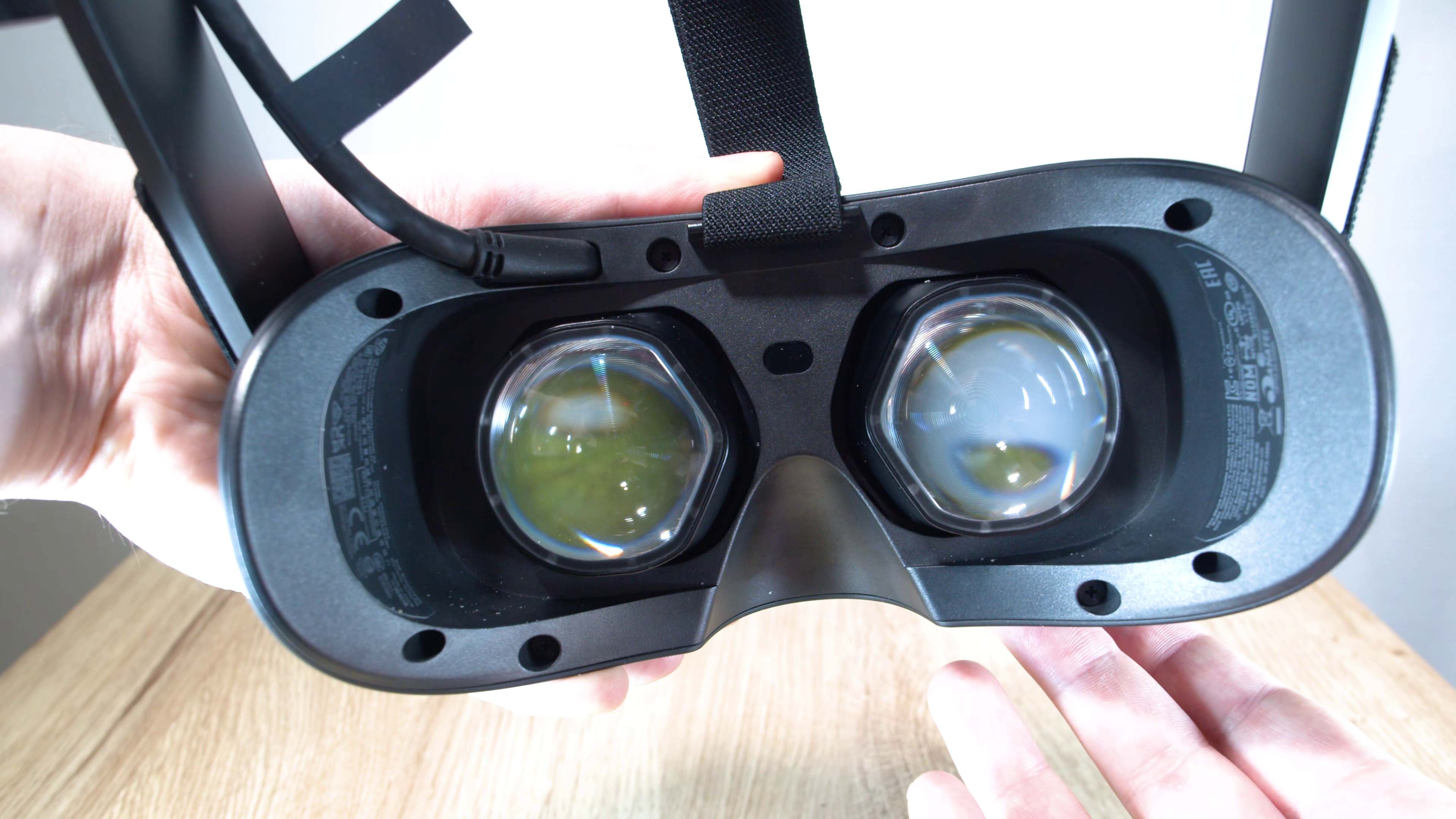 View at the lenses of the Reverb G2

After seeing such an improvement you notice FOV. Or actual lack of decent FOV. In fact, for me FOV of the Reverb G2 is similar to the one I see on the Quest 2 - about 100 degrees horizontal. After getting used to the much wider Valve Index this feels like a step back. At first I thought “did they just take a face mask from the Valve Index without changing anything resulting in such an issue?”. That would be a reasonable explanation, considering that on the Valve Index one could adjust distance between the screen and the eyes, a feature that is unavailable on the G2. But after comparing both face masks side by side it was clear that the one on Reverb is thicker. Also they are not interchangeable if you were wondering, plastic pins with magnets are located in the different spots. Luckily HP has released CAD files of face mask, so there are already 3D models available for printing at Thingiverse which will allow you to put the lenses much closer to your eyes. I have yet to find a 3D printer to check it out, however upon trying the G2 without a face mask I can see that there is definitely room for improvement. 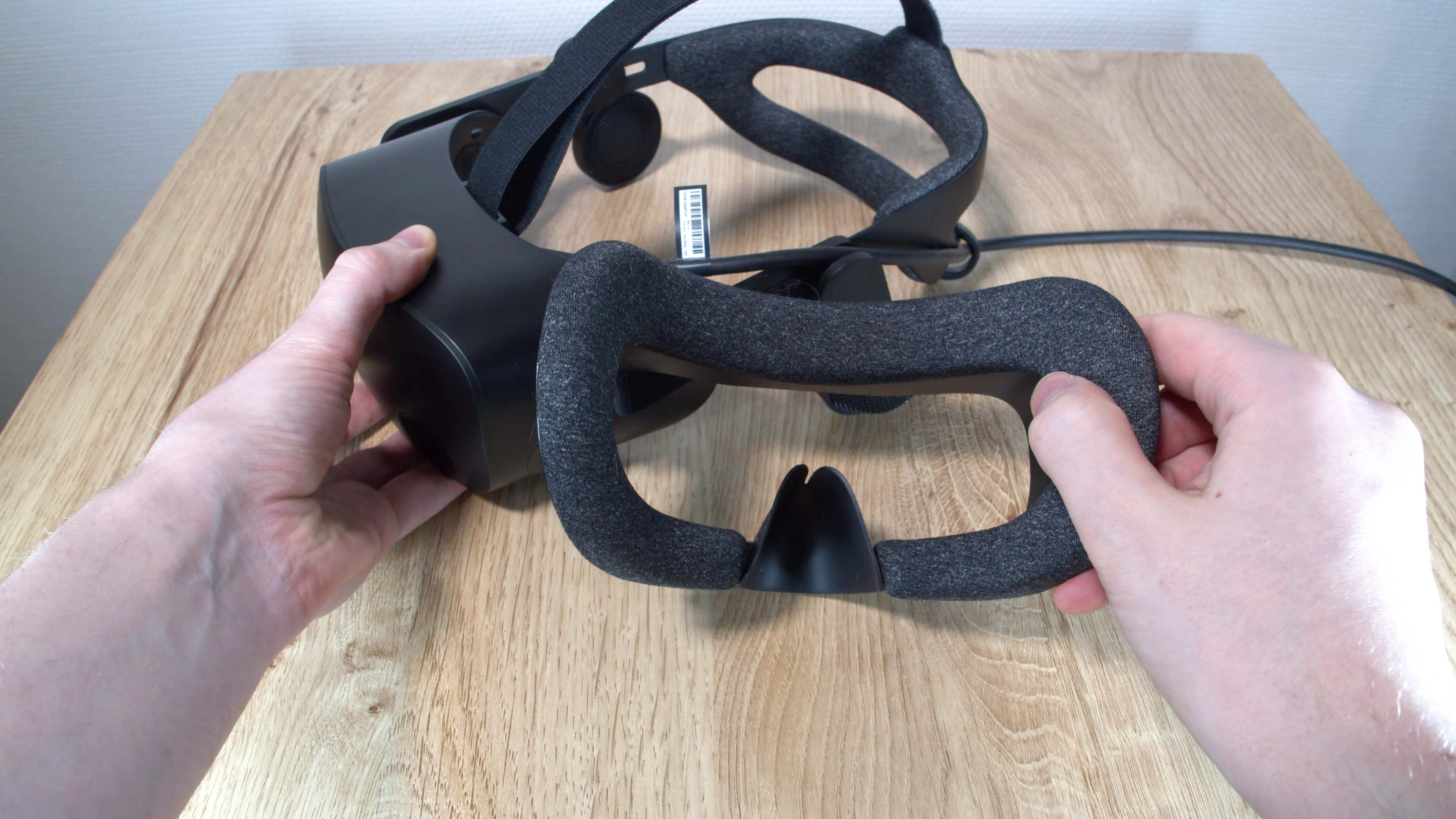 Face mask of the Reverb G2

What about the image in G2? Well, it is still an LCD panel, so it comes with all the issues of the LCDs - no real blacks and not so vibrant colors. I’ve tested side by side Quest 2 and G2 screens in one of the darkest VR games I’ve tried - Blood Trial. In the pitch black scenes you can equally not distinguish any details on both, while when I’ve tested it on my Vive Pro with OLED panels, you could clearly see the difference. Nothing unexpected here. God Rays are also present in G2, like in any headset relying on Fresnel lenses, however they are not so intruding. The Medal of Honor Above and Beyond splash screen with white letters on the dark screen looked sharp enough that I will give G2 “pass” for that.

Headstrap resembles the one on the Valve Index

HP decided not to invent the wheel and take a head strap directly from Valve Index HMD, slightly modifying it to reduce the cost. Adjustment knob in the back has disappeared, instead you adjust velcro straps on the sides and on the top in a similar fashion as it is done on the original Oculus Quest. I was always fond of Valve Index headstrap, unlike Vive Pro’s one it has always fitted me perfectly. If you will be the only user of the G2, you can adjust the straps for yourself and forget about touching them ever again, however if there are multiple users or you are using it for business - you will face unnecessary struggle. Luckily HP realised it and the enterprise version called the Omnicept Edition will get that knob on the back. Smart move. 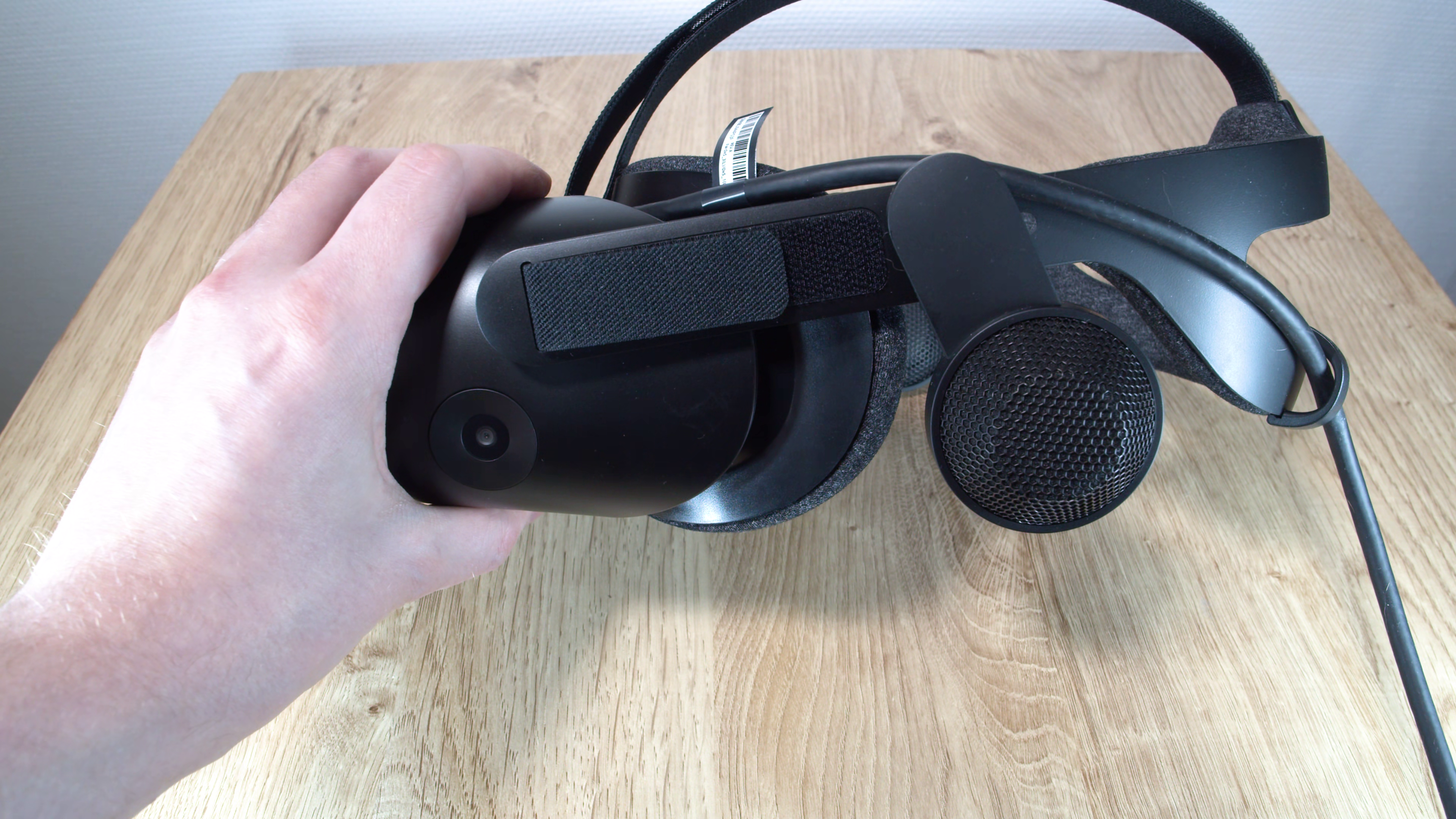 Headphones are the ones of the Valve Index

The headphones or the sound drivers were also taken directly from Valve Index. I am happy with the sounds it produce and even though I’ve heard reports of sound starting to break at higher volumes, I’ve never noticed anything like that myself. 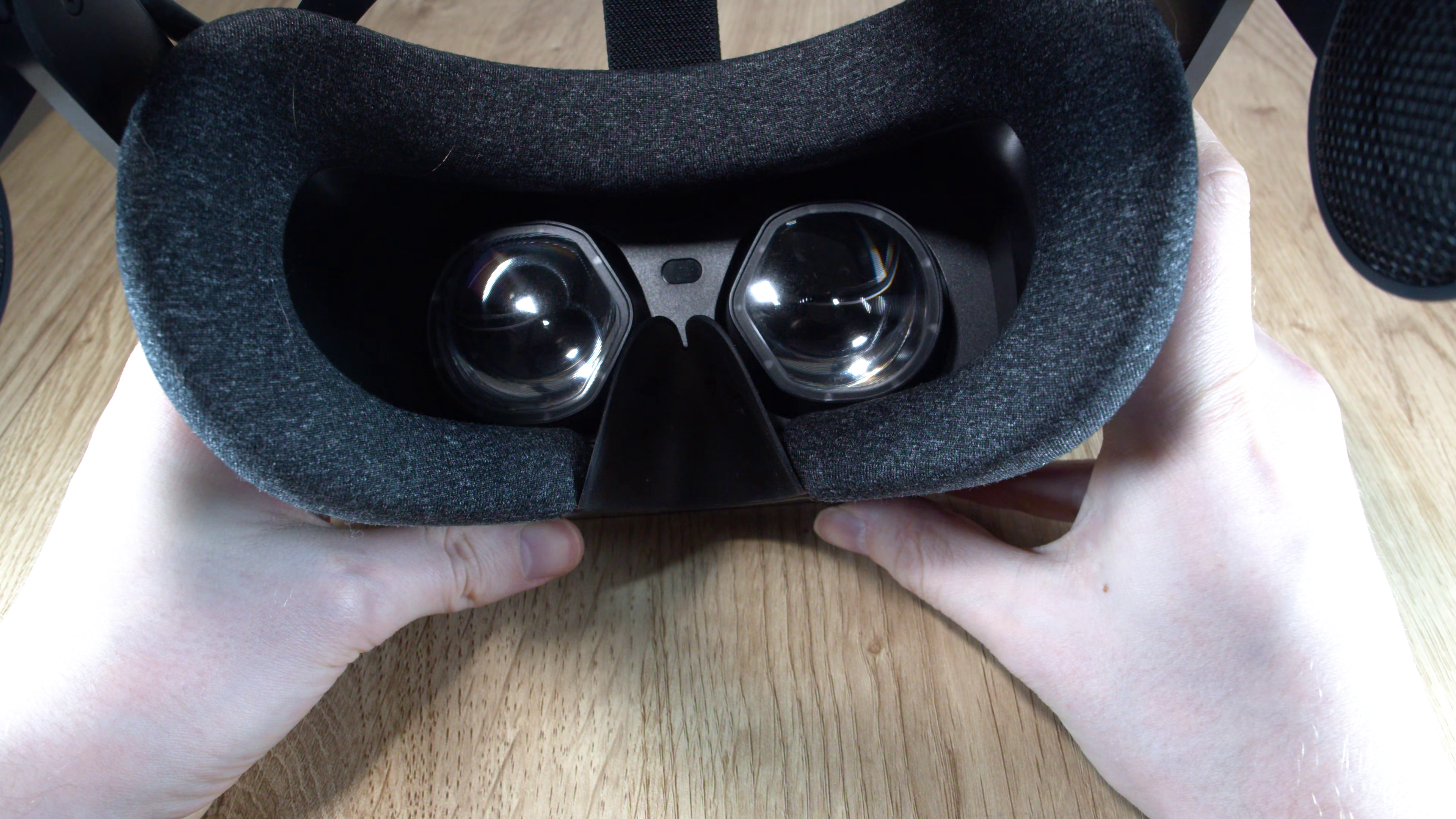 IPD can be adjusted, but it wouldn’t fit all

I am happy to see that IPD adjustment has become a standard for modern HMD’s - it is extremely important for the user to have the center of the lense as close to the center of the pupil as possible. Available range for IPD adjustment is between 60 and 68 mm, which is not ideal and will cover a little over 70% of users. Luckily I am right in the middle with 63 mm IPD.

Originally HP intended to connect G2 in the similar manner as the original Reverb, using a single USB and a single DisplayPort cable. However HP have found a way to lower persistence without lowering brightness, which required having power brick (thanks /u/Rigger1234 for correction). I don’t mind having external power, anyways my PC is next to the socket. However it seems like HP decided to cut the corners here as well by reusing one of the power bricks from their laptops. From one hand - who cares how the power is implemented, if it is lying somewhere under the table. On the other hand - Valve and Pimax have managed to shove all the necessary power converting components in a much smaller box located at the box. 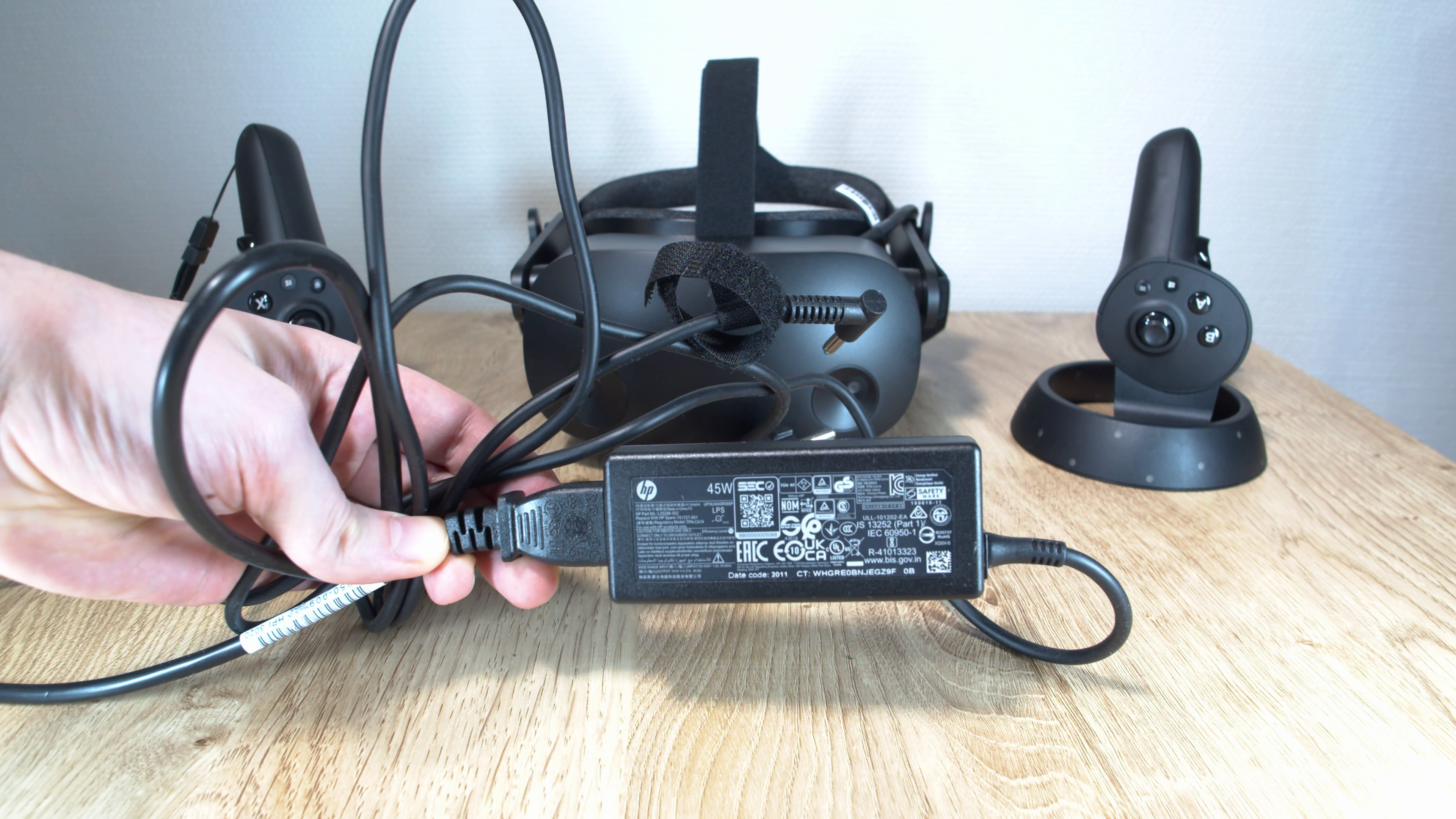 Worth noting that instead of traditional Type A USB connector, the G2 has Type C connector, which is useful for those who use it with a laptop. HP also had include Type C to Type A and DP to miniDP adapters in the box. 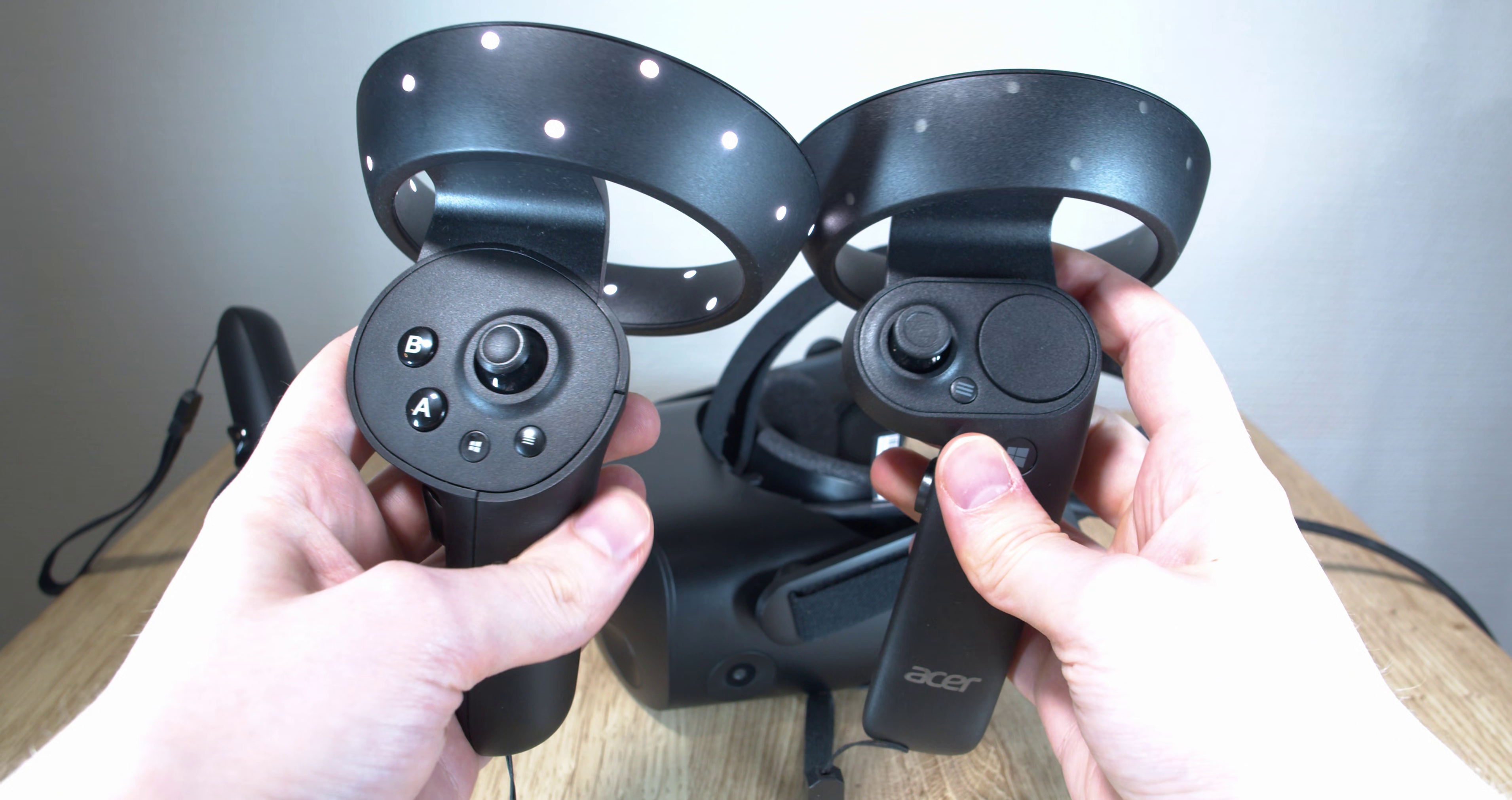 I am glad HP dropped that horrific design

HP is the first WMR manufacturer who decided to change up the original recipe for WMR controllers and introduce something new. Touch panels were removed (thank you!) and joysticks were replaced by better quality ones. Controllers now have A, B, X, Y buttons, similar to Oculus controllers. Unlike Oculus controllers, those buttons are clicking, instead of being pressed. There is very little room for the movement of the button down, which feels a little bit weird. Grip button is now implemented in the same manner as on Oculus controllers, it is easy to hold it, and by releasing it you will drop an object. Previous WMR controllers had horrendous clickable buttons for a grip. Windows and the menu button has moved higher and HP has decided to distinguish them by making the menu button pop up over the level of plastic. Even though the buttons are distinguishable, I am still constantly mixing them when I am not looking.

HMD tracking on WMR headsets was always on-par. Microsoft was first to show us that you don’t need external cameras or lighthouses to track headset in space. At that time they only needed two cameras to do that, but G2 has four of them. In any case HMD tracking is flawless, which I can not tell about controller tracking. Controller tracking is still relying on the visual tracking of the LED rings attached to controllers. My main issue with pre-G2 WMR was how tracking is getting lost on one of the controllers when you play shooting games or games featuring archery. HP wanted to improve tracking by adding two cameras on the sides of the headset. However, they failed. Don’t get me wrong, tracking on the sides works well, you can make a T-pose and your controllers will be perfectly tracked. But I do not shoot in a T-pose. In fact I rarely do that gesture at all. What I do - I put my right hand holding a grip of a virtual gun close to the chin. While my hand is there, I adjust the position of my right arm slightly to accurately aim through the scope. That’s when G2 fails me. 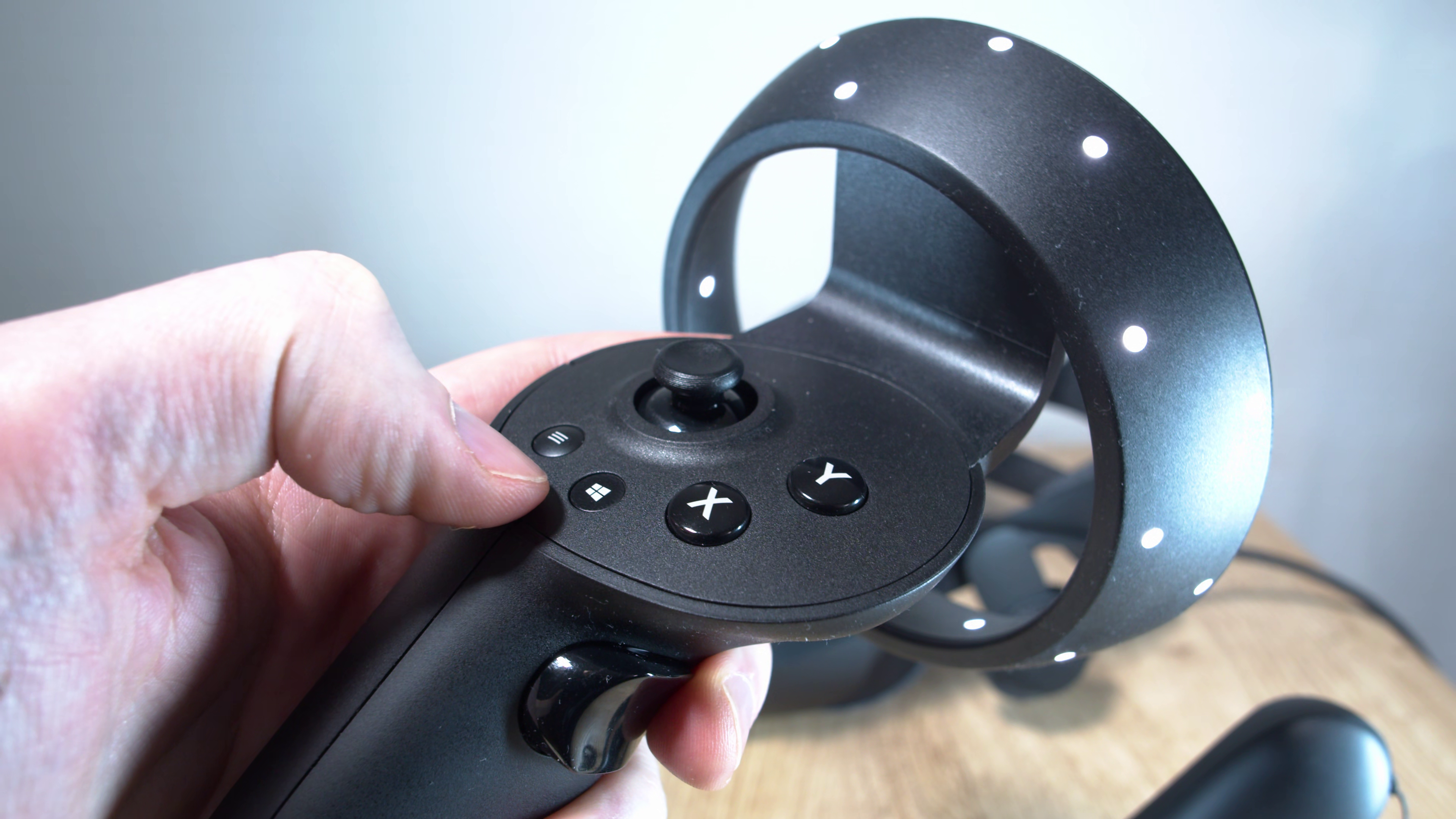 Microsoft and HP did a great job on predicting the controller’s position for a second after it leaves the tracking area. However, when my hand is close to the chest or close to my chin, it is outside of the tracking area much longer. This is when I am getting frustrated with the tracking. Similar things happen when you relax your arms and hold controllers down. Neither of the cameras are able to see the controllers at my waist level if I am looking straight. When I start lifting my hands, I can clearly see the moment when tracking starts working again. That is the moment when my gun/bow/sword that I hold in my hand jumps forward to the correct position. For me, that breaks the immersion. I start constantly holding my arms in front of the cameras even when I am not doing anything, just so I wouldn’t see that snapping arm glitch. Unlike Oculus headset, none of the cameras on G2 are facing down, so I don’t see this issue being resolved by software updates. 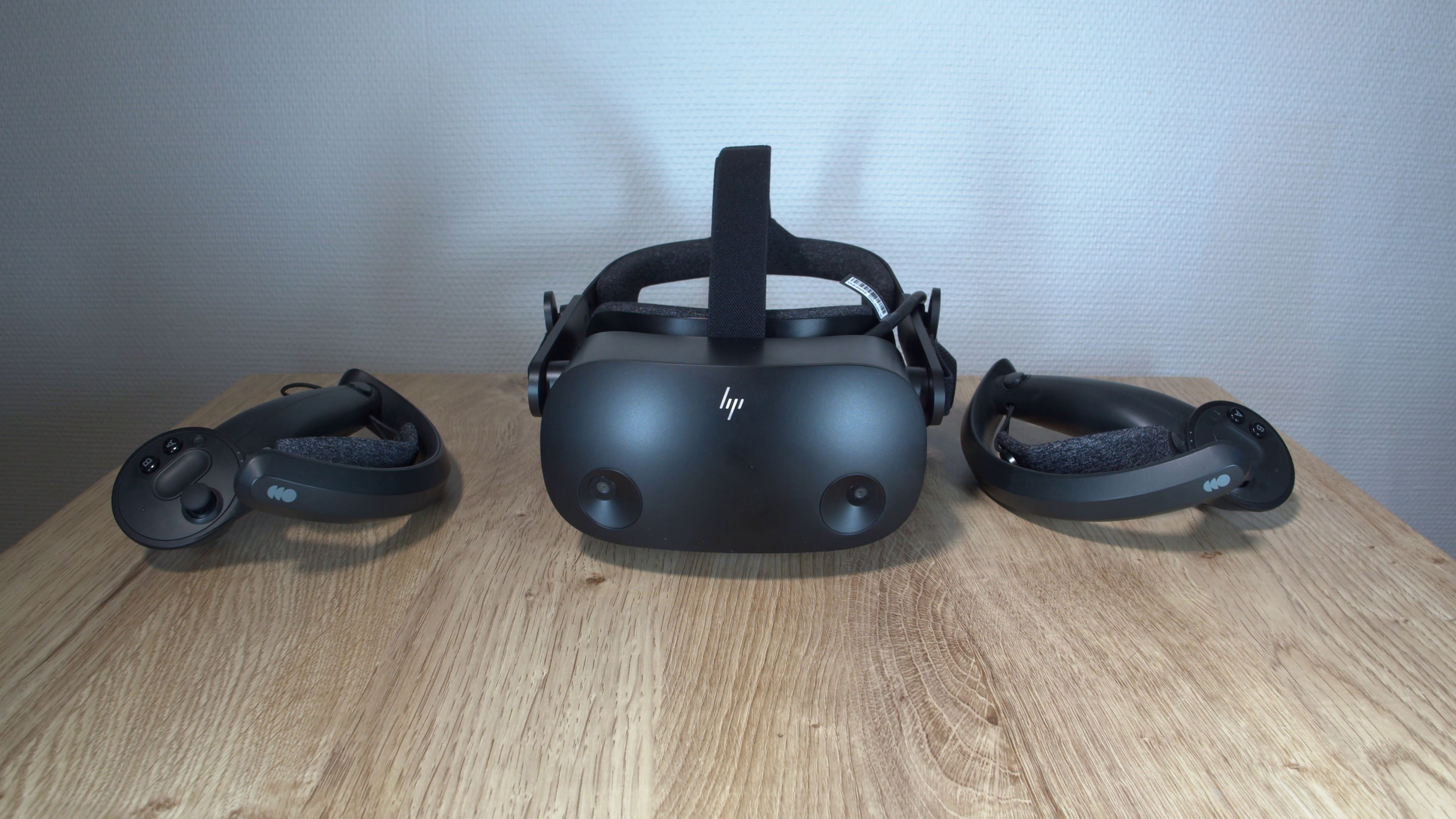 Luckily you can mix tracking systems with almost no hustle

Resolution for the issue has come from Valve. You can easily pair Valve Index controllers with Reverb G2, considering you have base stations and dongles for connecting controllers to your PC. It takes less than a minute to pair two tracking systems if you know what you are doing. G2 and Index controllers is a match made in heaven. Well, almost, I still prefer the wider FOV of Valve Index over the narrow mask of G2. But other than that - you get a perfectly crist image with no screen door and perfectly tracked pair of controllers.

After using G2 for about 10 days I went back to Valve Index. I was horrified. How did I manage to enjoy VR using Index with such a horrible and huge screen door effect? Of course after a few minutes your brain adapts back and starts ignoring the screen door, but damn, my favourite headset is ruined for me now. It is valid to compare G2 to Pimax 8k+ (I haven’t had my hands on 8kx) and Varjo VR-2. Since the 8k+ is upscaling the image to the 4k resolution, I didn’t see such image clarity on it compared to G2. As for Varjo, their screen is producing images beyond anyone’s perception, beating G2 fair and square. However Varjo products are not aimed at consumers. 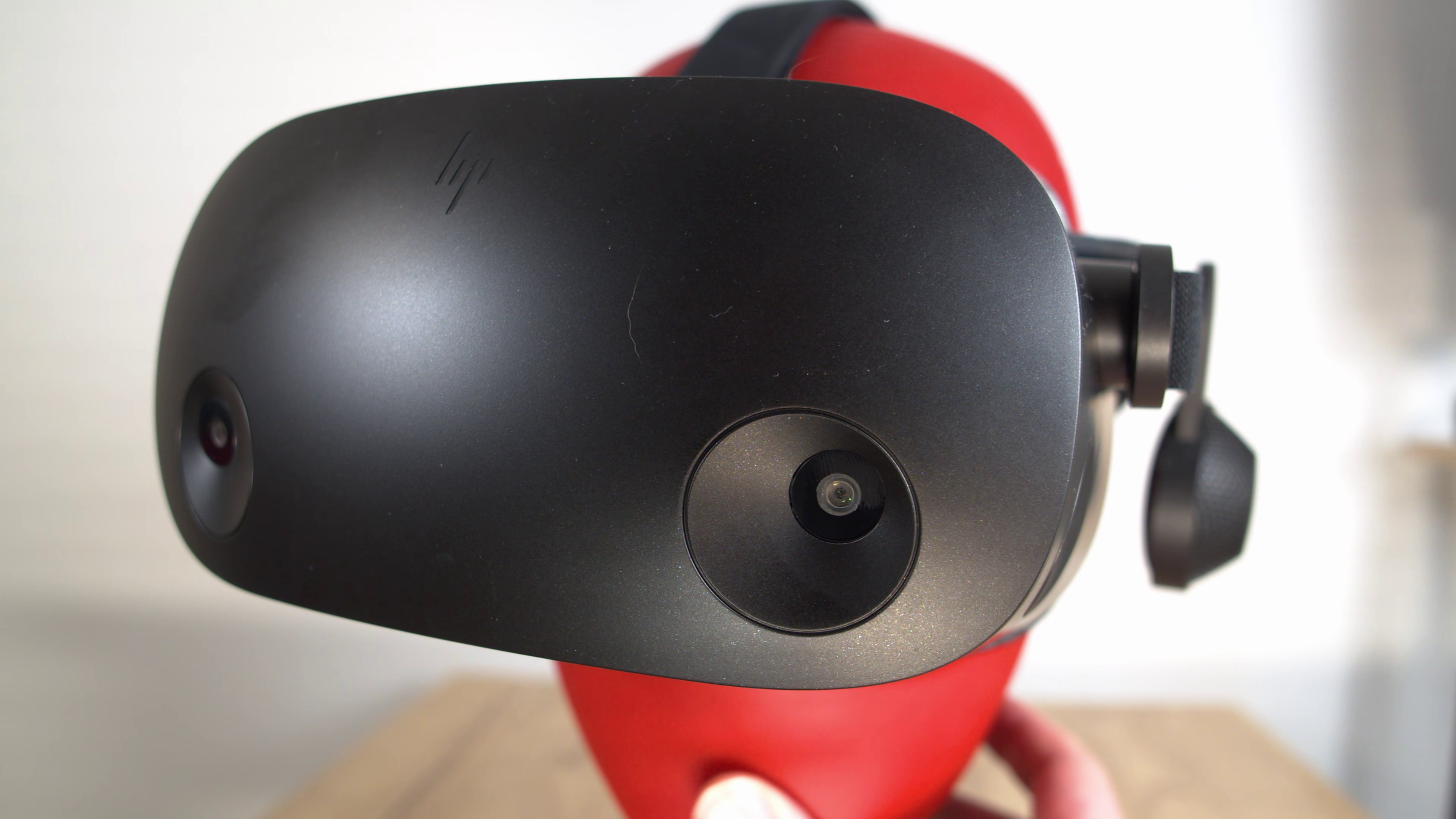 Look at me! I am the captain now!

I feel like G2 will be a go-to device for anyone who wasn’t happy with VR image clarity until now. It has the best price/value ratio for flight and driving sims users. If you paired it with an external tracking system for controllers, replacing the facemask with narrower one, it will reward you with the best possible experience in VR today.