StarVR is one of the most desirable VR headsets on the market. Partially, it is because we know the team behind it managed to fit 210 degrees of horizontal FOV (Field of View) in a device that is much smaller than Pimax and XTAL headsets. But mostly, because we don’t know much about it.

How it all started

StarVR project has been publicly announced during E3 2015 (Electronics Entertainment Expo) by Starbreeze studios, Swedish game developer and publisher mostly known from their Payday series about robbing banks. Starbreese just acquired French company InfinitEye which was working on a prototype device that would allow watching movies and playing games. The device at that time was looking slightly different compared to what we see today. 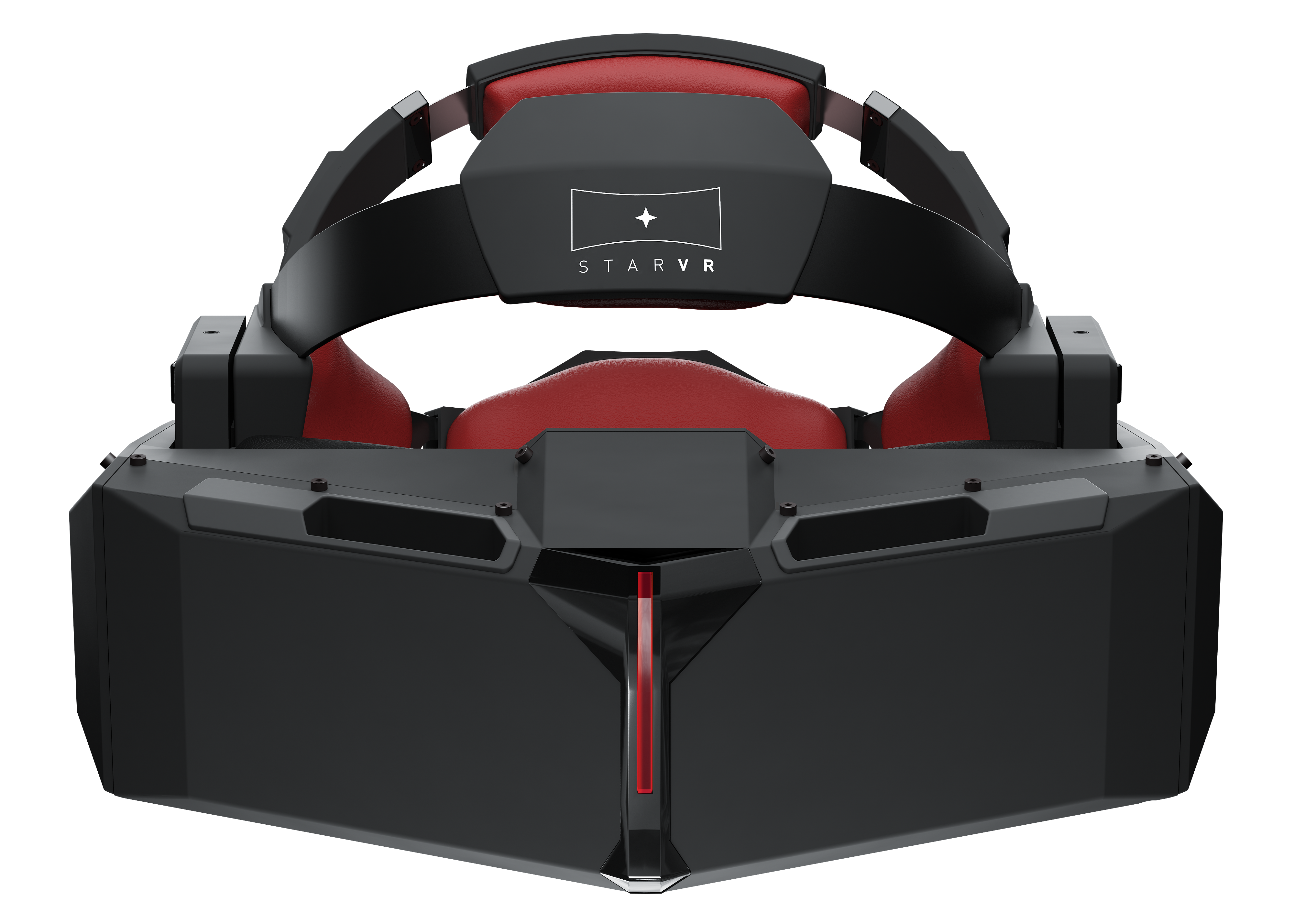 Original design of the device

Later on in September of the same year Starbreeze announced collaboration with another Swedish company Tobii. Working together, companies expect to add eye tracking capabilities to the headset and develop foveated rendering technology to reduce hardware load of the device.

In early 2016 Starbreeze decided to establish an VR arcade in Los Angeles, called Project StarCade. Arcade featured the company’s own catalogue of games and experiences including OVERKILL’s The Walking Dead VR experience developed by Skybound Interactive. Many years later, in 2020 Skybound Interactive would release The Walking Dead: Saints & Sinners.

In May of 2016 Starbreeze announced a joint venture with Acer Inc., who are mainly known for producing consumer electronics. Companies are expected to develop, design, manufacture, market, and sell StarVR HMD to the professional and entertainment market.

Soon after that IMAXhas announced their intent to open VR entertainment locations using the IMAX brand and StarVR headsets. New locations should open in shopping centers and tourist destinations. Meanwhile Starbreeze made an agreement with Hollywood studio Lionsgate on developing the John Wick VR game and others.

On June 25th of 2016 Starbreeze announced that Acer Inc. will invest in the StarVR project 9 million USD over two years, slowly gaining B-shares. Soon after that Starbreeze acquired French VR/AR and toys company ePawn for 4 million EUR in B-shares and 1.5 million in cash. ePawn was developing technology for bringing VR and tabletop games together. Starbreeze is interested in the technology as tracking tech that could be used for player’s positional tracking in the VR arcades. 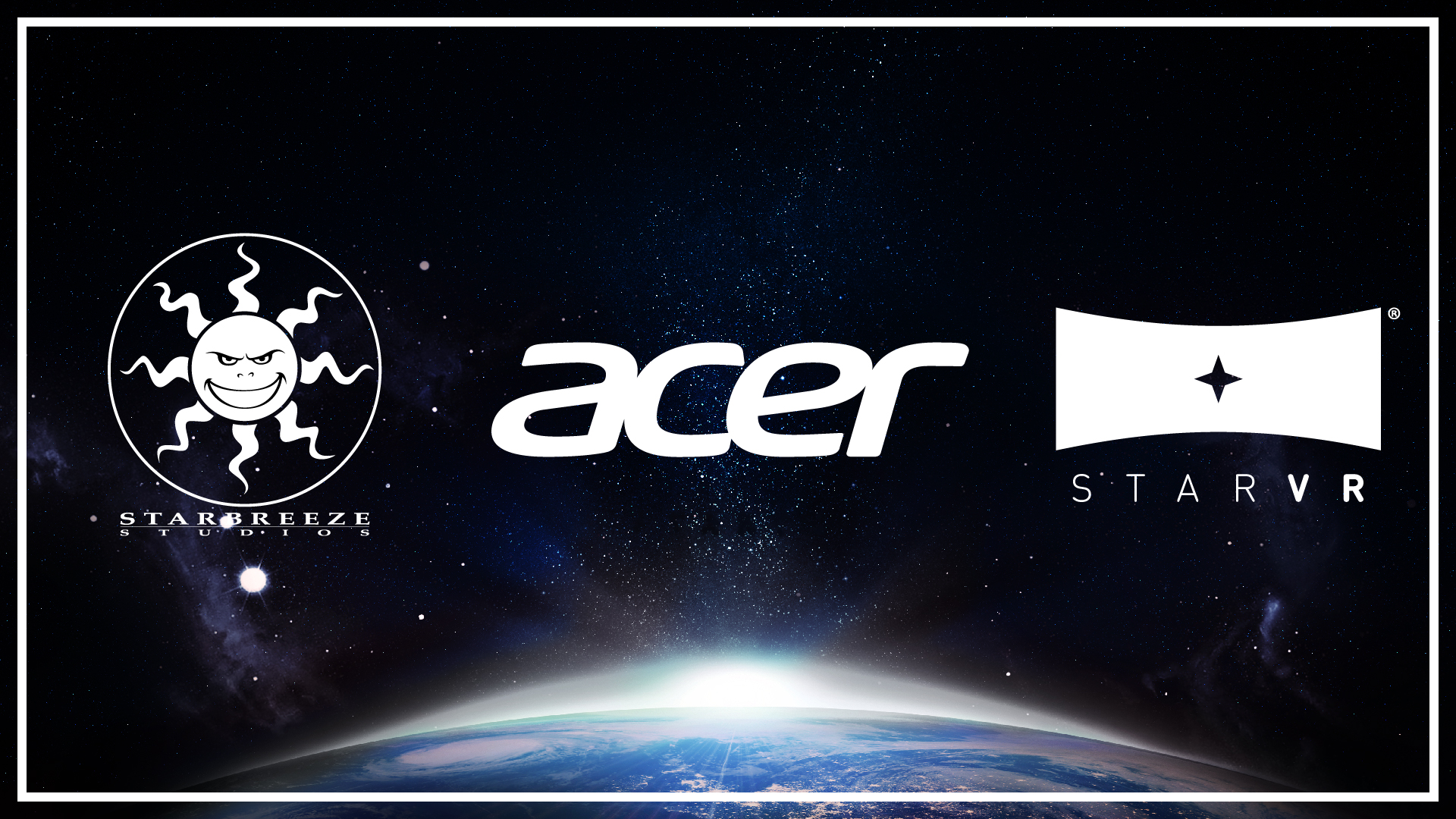 Announcement of collaboration with Acer

One year later, in September of 2017 Acer Inc. invested 5 million USD to the joint venture, receiving 66.7% of the company, leaving Starbreeze with mere 33.3%. Both companies express high interest in VR and the future of StarVR project. Next year, in February of 2018 Starbreeze confirms discussions about StarVR company going IPO in order to become leading global VR company. At that point it seems nothing could stop them. StarVR has 210-degrees field of view, in high definition resolution over the entire field, eye-tracking, support for multiple tracking solutions, lightweight casing, backpack wireless option and its own 2nd generation Fresnel lens. In March 2018 StarVR applied for Public Issuance in Taiwan, beginning the road to becoming an IPO.

In the end of May, Starbreeze opened its own arcade in Stockholm called Enterspace VR Center. In November, the company announced StarVR One with integrated SteamVR tracking. Companies and developers can apply for the development program, and if chosen, they will be allowed to purchase StarVR for 3200 USD. And that was the last we’ve heard from StarVR until early 2020.

When it all went to hell

Since 2018 Starbreeze had a rough patch, the company has acquired a new game engine and started transitioning half-done games to it, pushing release dates further. After a year of struggling to use the new engine for OVERKILL’S The Walking Dead it was decided to scrap two years of development and begin from scratch on Unreal Engine. Game was rushed and released in November of 2018 and was destroyed by reviewers and critics selling only 100 000 copies. After this fail Skybound Entertainment has pulled its licensing contract for The Walking Dead franchise. 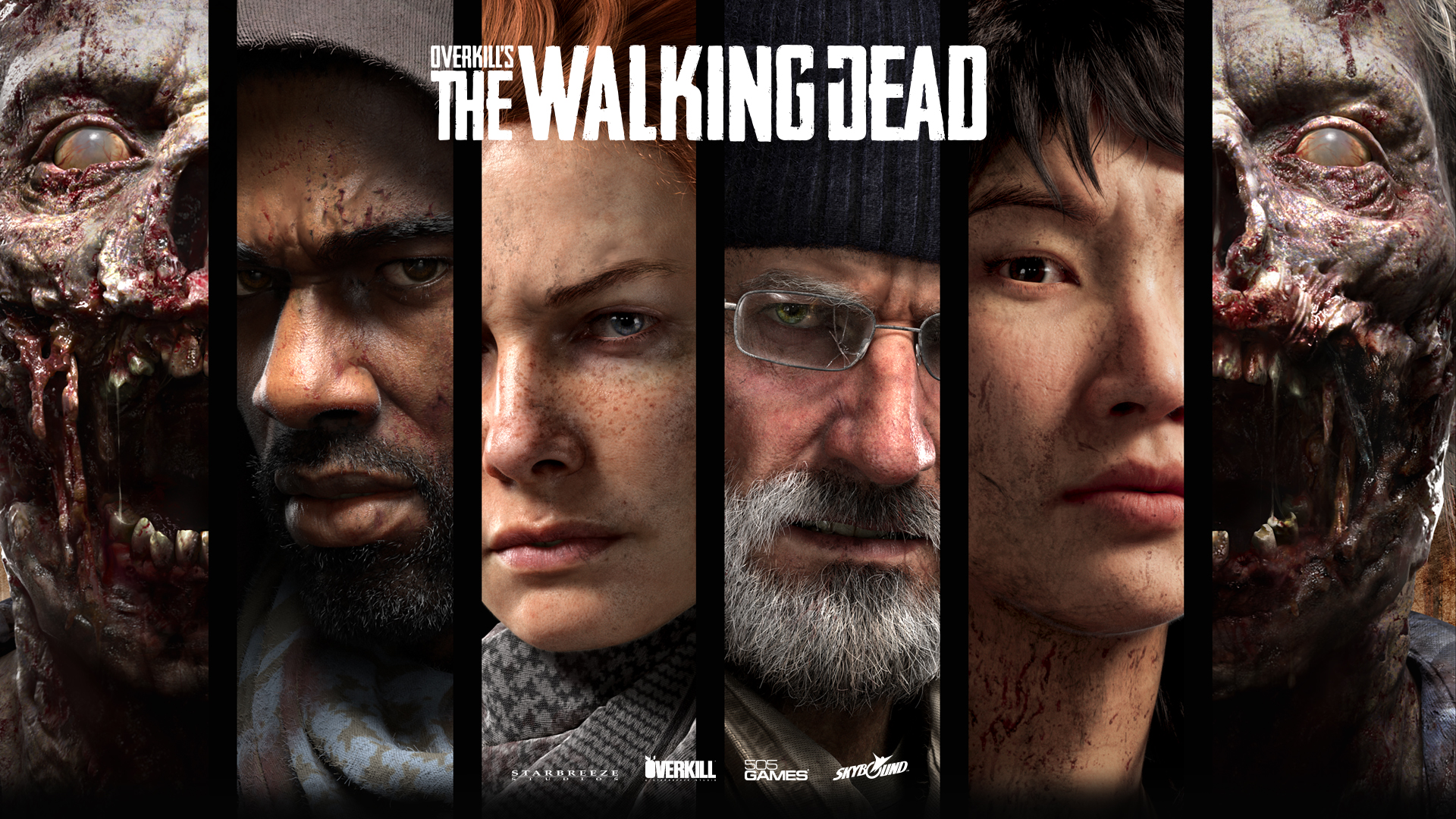 Starbreeze began reconstruction inside the company in December 2018 halting all internal work. Before news about the difficulties were announced, several executives have sold their shares of the company, which lead to their arrests in suspicion of insider trading. In February 2020 one of them was charged with a fine.

During the investigation by authorities, the company was financially struggling. In order to survive, the company sold rights for System Shock 3 to OtherSide Entertainment, 10 Crowns to Mohawk Games, publishing rights for Psychonauts 2 to Microsoft, and even sold shares of one of its studios - Dhruva Interactive to Rockstar Games. After acquisition Dhruva Interactive has become Rockstar India. Additionally 60 employees were laid off. In January, Italian publisher Digital Bros announced intent to acquire Strabreeze for 21.2 million USD.

As you can see, from 2018 until now StarVR was not worked on by Starbreeze and was quietly sitting in the shadows. First partners and developers that were approved, have received their StarVR One dev kits, but without support from the manufacturer and no updates to its software you couldn’t have even launched StarVR with modern VR games. Trust me, I’ve tried. Pictures of StarVR would occasionally show up in Acer’s presentation when talking about VR, but nothing concrete would be ever said about the headset. Usually, it would be featured next to another WMR headset from Acer - Acer OJO 500 (which was released), and later Acer OJO ConceptD. 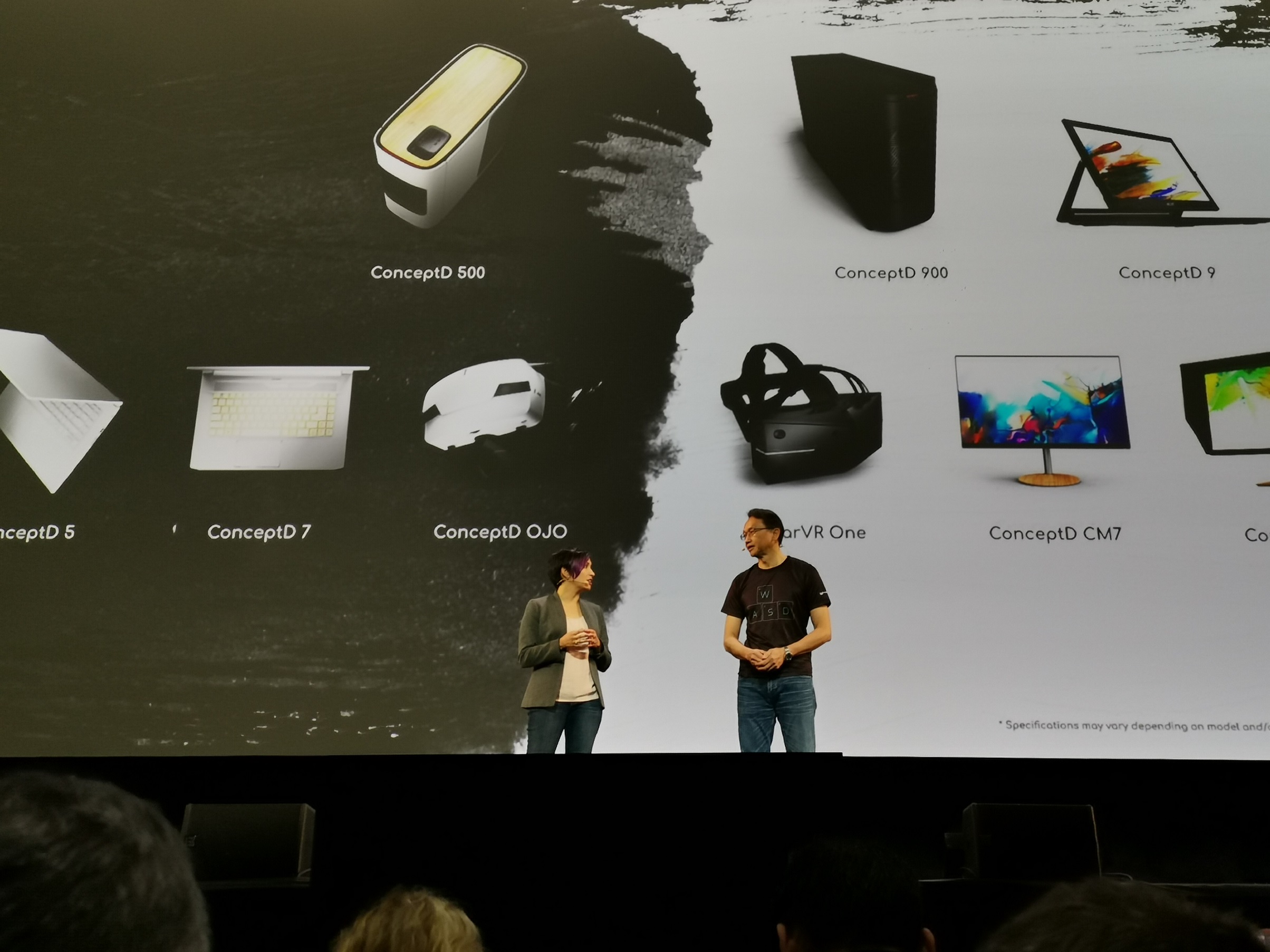 Acer mentions StarVR in 2019. Image is taken from t3me.com

However, in February of 2020 Acer have announced that OJO ConceptD is canceled and is no more. And in May of 2020, suddenly pre orders were open again, for the same price of 3200 USD. But this time - enterprise only. Headset could be purchased through partners in Japan and Taiwan, later coming to China, Europe and the US. 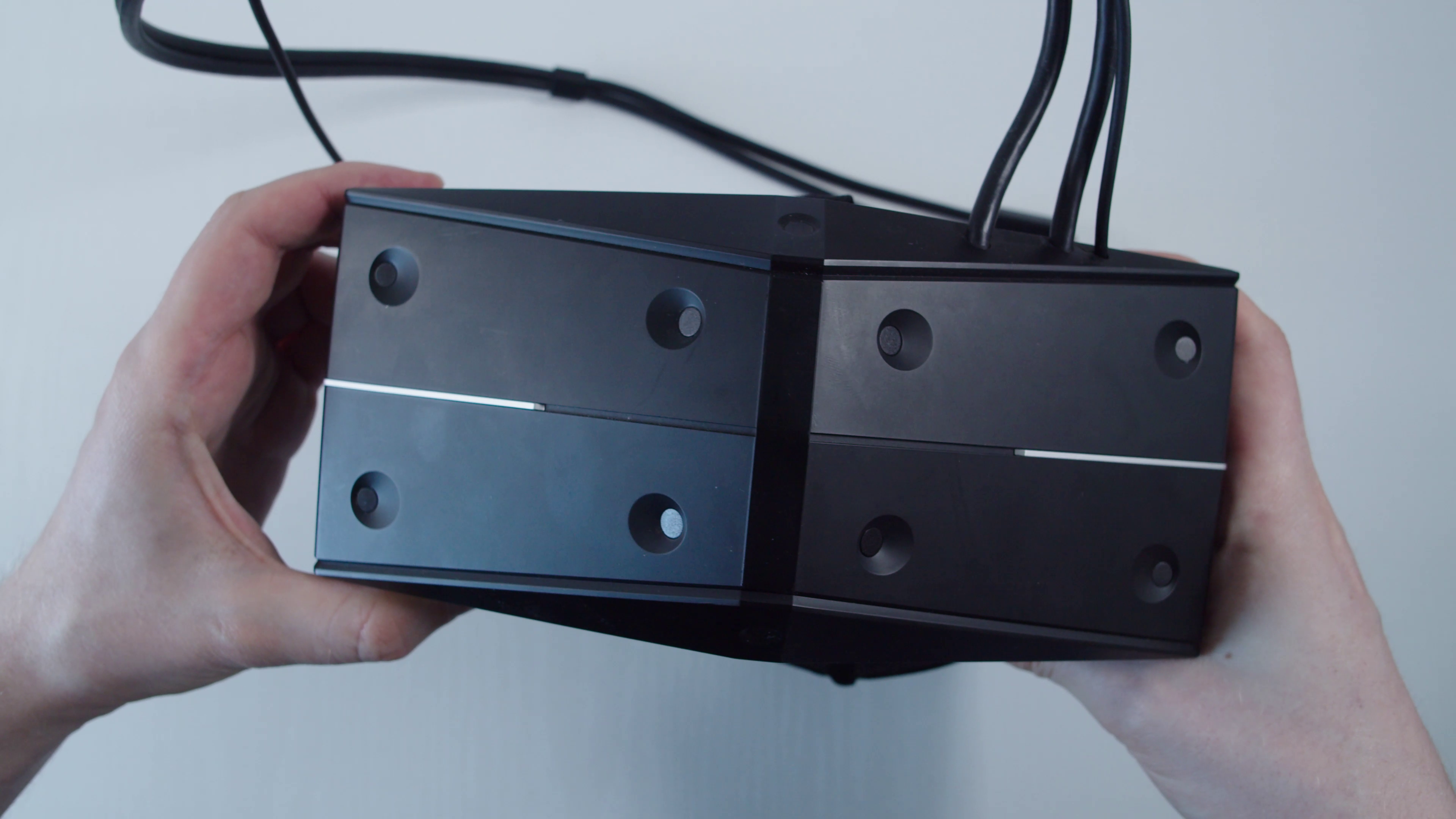 Old model from before the silence. It is identical to 2020 StarVR.

I have reliable sources who said that StarVR One’s were produced in hundreds of pieces in 2018, and since Starbreeze’s difficulties those headsets were collecting dust somewhere in the warehouse. Now Acer decided to get rid of them. Few things indicate that it is true - headsets didn’t change in specs. For 2018 displays with 1,830 × 1,464 pixels per eye were good and cool, but nowadays Pimax 8KX is offering 1,920 × 2,160 per eye, while newly announced HP Reverb G2 (and original Reverb) offers even higher 2,160 × 2,160 per eye. Of course, we are comparing AMOLED in StarVR One to LCD panels for competitors, but in the past few years LCD panels made a huge leap forward, giving OLED’s quite a competition. And it doesn’t help that this resolution is stretched over 210 degrees of fov, while HP Reverb G2 is having less than 120 degrees.

Why is StarVR special

StarVR Compass - software for StarVR was rolled out in March of 2020 and StarVR now has full support of SteamVR. Software allows you to make Display Optimisations by downloading mura correction files - it would search the database by the serial number of the headset, and will download correction files that were made from the images of screens taken in the factory. We were doing the same thing at Varjo with all of the headsets. That way you get much better, solid colors. Software also allowed changing screens frequency (max 90 Hz) and field of view. Latter one only had two options. 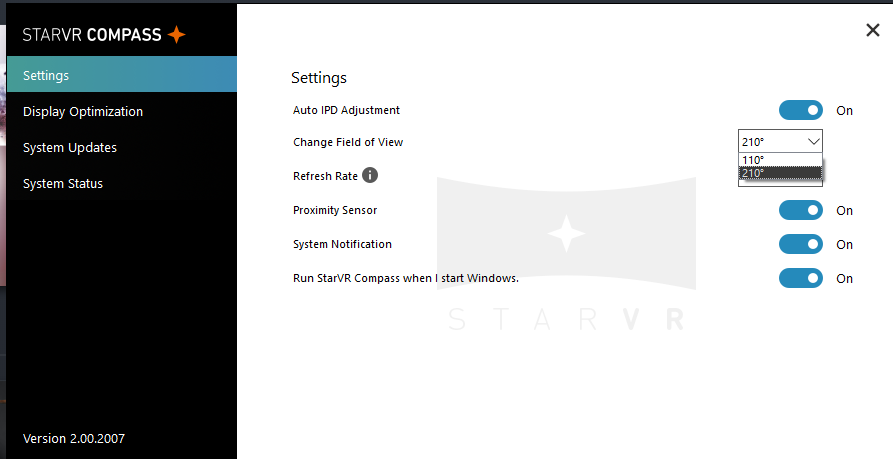 Together with Compass you will be asked to install Tobii software. When running it together with Compass, the system can track player’s eyes and automatically track the user’s IPD (Inter Pupillary Distance), adjusting image position. Unlike Varjo headsets, where IPD is adjusted mechanically by motors, here it is only done in software.

Curiously, the proximity sensor on StarVR One is not located between lenses where we usually see it in other headsets. It is located in the nose area, performing in the same way. Not clear though why you need a separate sensor for that if you have eye tracking, using which you can detect if the headset is on the head. 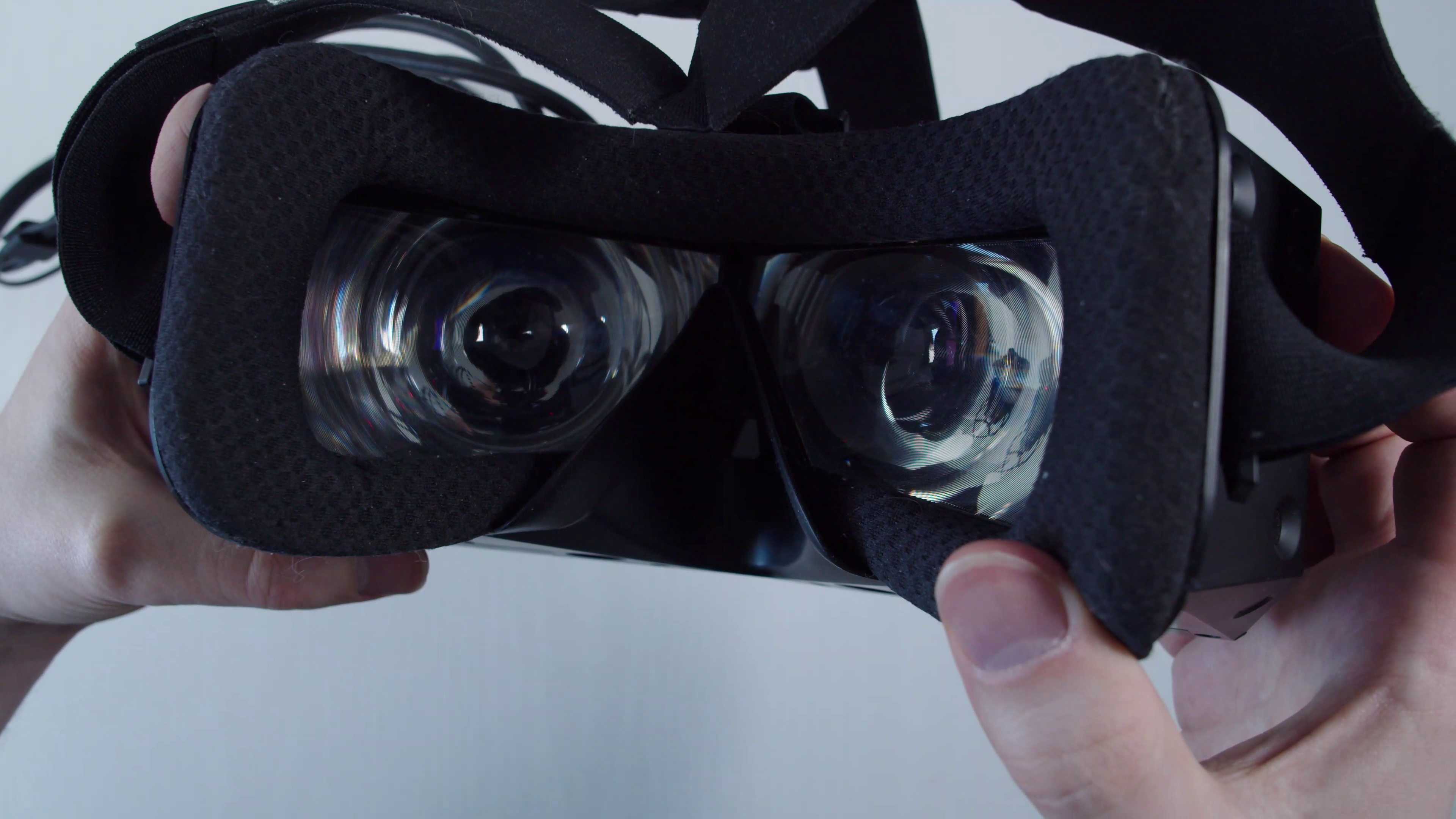 There is no space between lenses for the proximity sensor.

System seller for StarVR One is the large FOV without aberrations in a small case. And I have to admit, it does look like they have nailed these points. It took Pimax two years of trying and failing to get to the state where they almost have no aberrations, but StarVR did it from the first try.

From the people who were close to the original StarVR project I’ve learned that manufacturing StarVR costs much less than $3200, approximately half of that. Main reason behind this specific price point is the customer that StarVR wants. Enterprise. No, not the one from Star Trek. Headset needs to be enterprise only. And for the enterprise $3200 is a good price point. It wouldn’t be considered too expensive (at Varjo headset price started with $5000 and still we had enough customers). If you would put a price tag of $1500, many consumers would want to buy that headset for games and home use. And when they would learn that consumers couldn’t buy this headset anyways, they would be furious. However, if you set the price high enough, it would make 99% of consumers uninterested, while keeping business customers happy with the price.

Another way of scaring people away is to have high-end requirements. Currently for GPU StarVR is asking for NVIDIA® GeForce® GTX 1080Ti or NVIDIA® Quadro RTX5000 - which are expensive for the average Joe, but doable for business. 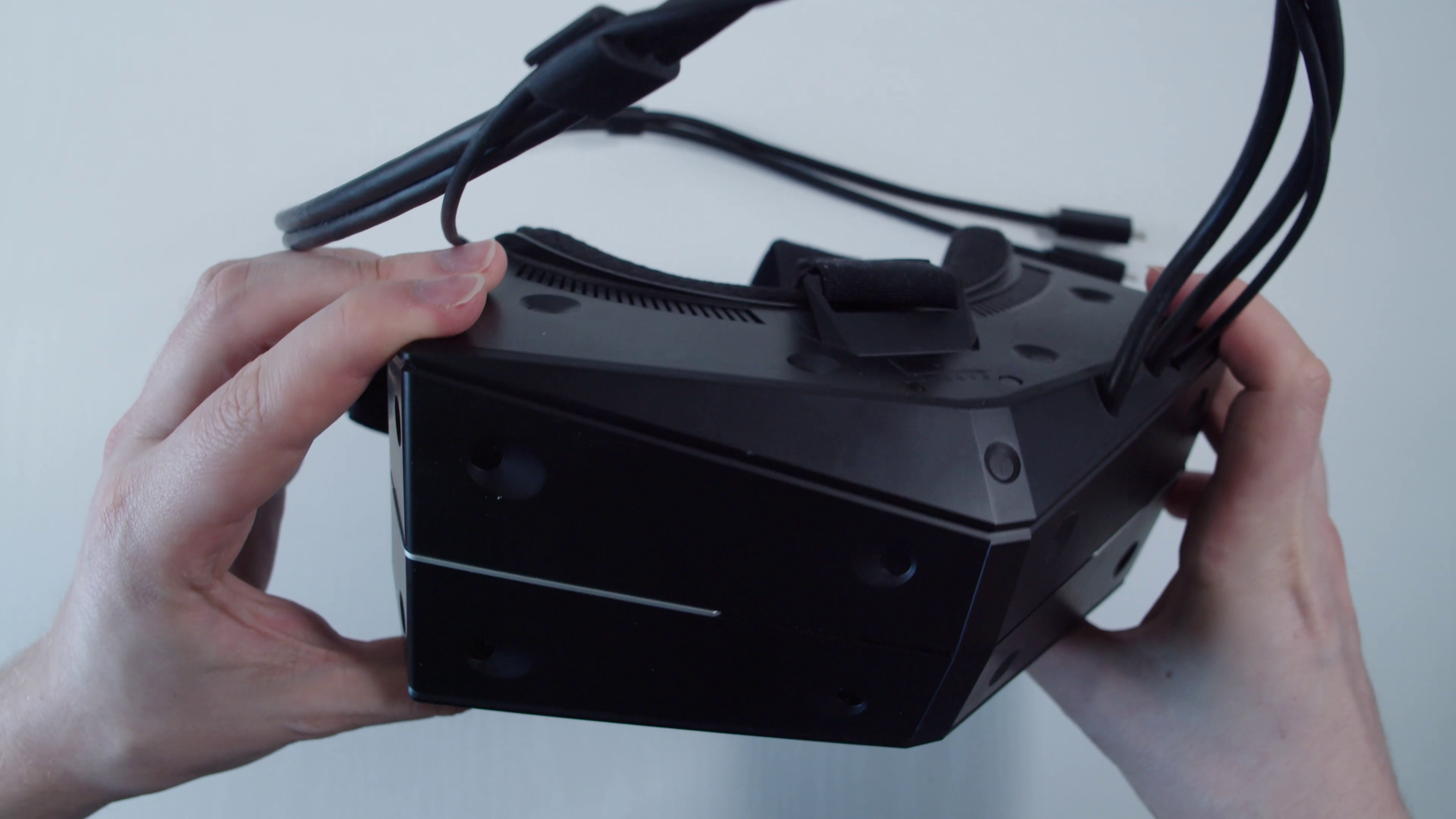 It is still a devkit, see the cables going inside the body of the device.

In the future I hope to see a consumer oriented version of StarVR with improved displays, built-in headphones, but still about the same size. Of course it should be much cheaper to compete with Pimaxes, Indexes, Vives, and Oculuses that already dominate the market. StarVR would need to figure out how to lower system requirements, either by heavy usage of foveated rendering, or by improving renderer software.